A History of Falconry

You are here: Home / A History of Falconry

At the Abu Dhabi Symposium on “Falconry: a World Heritage” in September 2005 experts on many aspects of falconry met and gave presentations on their various specialities. Falconry from all regions of the world was represented and many exiting facts came up that were previously unknown to those of us restricted to learning from our own compatriots and from books written in our own language. Here is a short summary from a layman’s point of view. Apologies to those countries whose names and histories do not appear, the number of experts that were able to attend the symposium was sadly limited.

A significant problem with recorded history is that history can only be recorded where records exist. We are certain the origins of falconry go back much further than the origins of writing because the earliest written records found describe a highly organised and technical falconry that must have taken many hundreds, if not thousands of years to evolve to that level of sophistication. Many experts present at the Symposium are engaged in full-time research into this elusive subject.

History has its uses.

Falconry is not a museum piece, it is alive. We can enjoy and promote all the best of modern falconry and support its traditional forms as well. We must protect and promote these vulnerable, minority aspects and practices of falconry as precious embodiments of world cultural history. The project to have aspects of falconry recognised by UNESCO encourages research into the social history of falconry, enriches the historical consciousness of falconers and promote and safeguard falconry for future generations. 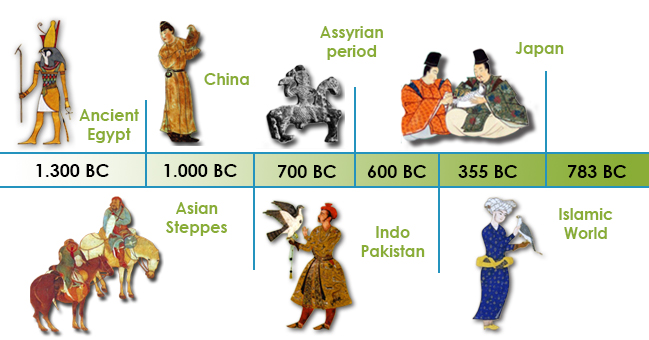 Falconry was practiced Mongolia at a very remote period and was already in high favour some 1000 years BC, that’s 3000 years ago. It achieved a very high level of refinement on the military campaigns of the Great Khans who practiced falconry for food and for sport between battles. One such military expedition reached almost to the gates of Vienna. By the time of Marco Polo there were over 60 officials managing over 5000 trappers and more than 10000 falconers and falconry workers.

Falconry in Korea and China

Falconry was combined with legal and military affairs, diplomacy and land colonisation and moved accordingly, reaching Korea in 220 BC and Japan much later.

In China falconry once occupied a very significant role – there are many historic remains in literature, poems, painting and porcelain describing it in the culture of the imperial family, the nobility and the social life of the ordinary people. Chinese falconry had an inseparable relationship with politics and power and written records go back prior to 700BC. These depict a very mature and technical falconry, exactly parallel with techniques used today. The imperial family of the time (Chu Kingdom) were already using falcons, eagles and shortwings in exactly the same way we do. This would put the birth of falconry in the region (if indeed this was where falconry was born) at over 3000 years ago.

Falconry was strong in China right into the early 1900’s. It enjoyed imperial patronage and was popular among the aristocracy and even common people all through the centuries; largely due to the medieval society China endured all this time. With the decline and fall of the imperial family in 1912, falconry at the aristocratic level became feeble and died. At the same time the falconry of the common people declined through conflict between ethnic groups, invasion by eight different foreign countries and ultimately World and Civil Wars. It survived in ethnic minority groups – the Hui, Weir, Naxi etc until in the late 20th century falconry in China has revived and it has been estimated that there are almost as many falconers inside China than outside it.

Japan’s isolation by the sea meant that the natural advance of falconry did not come till quite late, the first written records are from 355 A.D. (Nihon Shoki) from Paekche (old kingdom in Korea), which documented hawks exported from Korea to Japan. There is archaeological evidence then from the 6th century onwards. In ancient times Japanese Hawking was done by falconers on horseback and armed with bows on their back. This gave a deliberate martial effect to a hawking party, designed to intimidate and overawe lesser mortals. The scene of a hawking departure deeply impressed spectators, so hawking was used very effectively to symbolise and publicly demonstrate military power and dominance over the land. Hence the central rulers always tried to monopolize or even ban hawking through laws and Buddhist ideology, while the emerging local lords kept hawking in practice either through connections with those in influential positions or through finding religious excuses in Shintoism. This importance of public demonstration in Japanese falconry created a tradition of beautiful costumes and elaborate equipment the aesthetics of which have survived to the present day.
Imperial Falconers existed under the Imperial Household Ministry until the Second World War after which it became open to distribution to the public by a system of apprenticeships to retired imperial falconers leading to the “Schools of Falconry”, the Yedo school, the Yoshida School etc. the ideals of which exist to the present. There was also a tradition of subsistence hunting with Mountain Hawkeagles from the early 19th century. Unfortunately this bore the brunt of opposition by birdwatcher fanatics and it is has almost disappeared.

Falconry in Iran and Persia

Despite a belief that falconry originated in the Mongolian steppes, Iran/Persia is sometimes also cited as the cradle of falconry. A theory put forward at the Symposium suggested a possible “parallel evolution” – with the first hunting birds of prey trained at around the same time in both the Mongolian steppes and in Iran. In documented Iranian history the one who used birds of prey for the first time was Tahmooreth, a king of the Pishdadid dynasty, 2000 years before Zoroaster who himself lived around 6000 BC.

This could mean hunting with falcons has a background of 8 to 10 000 years. This was one of the most interesting hypotheses at the Symposium and was presented with several proofs, dates of dynasties, approx lengths of generations and reigns.

In India falconry appears to have been known from at least 600 years BC. Falconry became especially popular with the nobility and the Mughals were keen falconers. Surprisingly, the humble sparrowhawk was the favourite of the mighty Emperor Akbar. In the Indus Valley, falconry was considered a life-sustaining instrument for the desert dwellers, while those from the green belts considered it as a noble art and used the falcons as symbol of high birth and luxury. Organized hunting parties would go out for game. Richard Burton, the famous 19th Century historian and translator, wrote extensively about falconry in the Indus Valley, citing the interesting practices of its communities in his book “Valley of the Indus.”

In the Rajput States – in Jaipur, Bhavnagar etc. the royal families continued to cherish the sport of hawking till the 1940s, but then partition and subsequent political problems all but did for falconry in India. Nowadays, while there are many people who have paper knowledge of the birds, there are very few with practical knowledge left.

Falconry appeared with the emergence of civilizations and was already popular in the Middle East and Arabian Gulf region several millennia BC.

In the Al Rafidein region (Iraq) it was widely practiced 3500 years BC; in 2000 BC the Gilgamesh Epic clearly referred to hunting by birds of prey in Iraq.

The Babylonians created a Divan for falcons and made game reserves for quarry species. Al Harith bin Mu’awiya, an early King of the present region that includes Saudi Arabia, was one of the first who trained and hunted falcons. The Omayyad caliphs and princes, Mu’awiya bin Abi Sufyan and Hisham bin Abdul Malek, practiced falconry and falconry had a good position in the Abbasid period. The caliph Haroun Al Rasheed was fond of the sport and exchanged falcon-gifts with the other kings.

The Arab poets composed a lot of poems lauding the falcon and all Arab classes – Kings, Sheikhs and cavalry – practiced falconry and bequeathed it to the next generations. The Arabian Gulf region became famous for its falconers and falconry traditions.

Through Arab influence it spread out through the Islamic World, eastwards into the great Islamic Empires of Central Asia and westwards across North Africa to the Magreb, giving us the distinctive styles of falconry of the Bedouin, of the Kingdom of Morocco and the Magreb and of Tunisia (passage sparrowhawks at quail – note similarities with the falconry of eastern Turkey and Transcausasia).

The Holy Koran itself includes a falconry-related verse that permits falconry as a hunting method. Falconry is considered a symbol of this region’s civilization more than any other region in the world; 50% of the world’s falconers exist in the Middle East, which includes the Arab region.

In the philosophy of the region hunting trips teach patience, endurance and self-reliance and bravery can be learned from falcons.